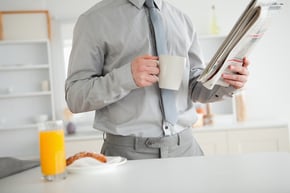 Apple's latest operating system, High Sierra, was found to have a massive vulnerability. By typing the username "root" and leaving the password blank, devices running the operating system could be accessed, offering a way to steal data and upload malicious software.

In Check Point's survey of 850 businesses around the world, all were found to have experienced a mobile cyberattack. This demonstrates the dangers of enabling unsecured BYOD and mobile data access. Additionally, the report contains surprising statistics on mobile malware, man-in-the-middle attacks, and more.

The supermarket chain Morrisons was recently found liable for a breach caused by an ex-employee in 2014. In 2015, the employee was sentenced to eight years in jail for maliciously leaking the payroll data of 100,000 fellow employees. However, Morrisons will now be held responsible, as well.

The National Credit Federation (NCF) is reported to have leaked sensitive data belonging to tens of thousands of its customers. The information, which included bank account numbers and scans of Social Security cards, was leaked through an Amazon S3 misconfiguration that allowed complete public access to certain data.

Imgur recently discovered that it suffered from a breach in 2014 that led to the compromise of 1.7 million users' email addresses and passwords. The attack serves as an example of the fact that breaches (and ongoing data theft) can take years to detect.

Clearly, organizations that fail to protect their sensitive information will suffer the consequences. Learn how to achieve comprehensive visibility and control over data by reading the solution brief for the Next-Gen CASB.