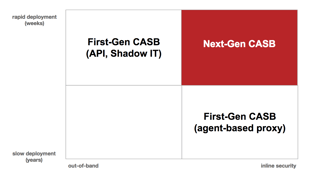 Recently, Bitglass was selected at a Fortune 100 financial services company for their CASB platform.  During the course of the competitive process, we learned some interesting things about the CASB market.

In other words, First-Gen CASB deliver weak out-of-band security that is deployable, or offer strong inline security that is undeployable.   Neither choice is satisfying if you are Fortune 100 financial services company.

Bitglass is the only Next-Gen CASB, built on a hybrid agent/agentless architecture.   Our largest customers with over 100K users deployed inline security in weeks and have been in continuous production for over several years.

Get a free trial of the Bitglass Next-Gen CASB today.